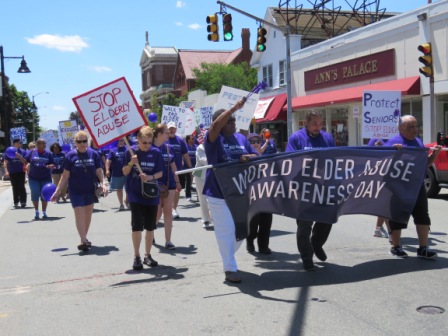 OCES joined forces with the Brockton Council on Aging (COA) to “March Against Elder Abuse”. On June 14th, over 150 members from the community and the two organizations marched down Main Street in Brockton in an effort to raise awareness of elder abuse.

June is designated as Elder Abuse Awareness Month by the International Network for the Prevention of Elder Abuse and the World Health Organization at the United Nations.

After the march, participants gathered at the Brockton COA where Janice Fitzgerald, Director of Brockton COA and Teresa Kourtz, Director of Protective Services at OCES shared information on how to assist elders in need and answered questions.  A representative from the Executive Office of Elder Affairs also participated in the event.  Awards were presented to activists in the community who have supported efforts around this issue, including Aguinaldo “Nato” Fonseca, Vice President and Business Development Officer of HarborOne Bank, Officer Anthony Giardini from the Brockton Police Department, and SignDesign.

Last year, OCES’ Protective Services Department received close to 2,000 reports of suspected elder abuse and financial exploitation. Types of abuse include physical, verbal, sexual and financial. When there is a referral made to OCES by  Centralized Intake at the Elder Abuse Hotline, a Protective Services Worker investigates the report, provides support, and if needed, information about resources such as medical, legal, psychological, financial and housing assistance.

Citations commemorating Elder Abuse Awareness Month were presented by Mayor Bill Carpenter from the City of Brockton, State Representative Gerard Cassidy from the Commonwealth of Massachusetts, and Congressman Stephen Lynch from the U.S. House of Representatives.

“World Elder Abuse Awareness Day is an opportunity to share information and spread awareness about abuse, neglect, and exploitation of older adults. As individuals, and working together, we can make a difference,” noted Susan Willis, ASAP Program Director.

If you know, or suspect, that an elder is being mistreated or neglected, call the Massachusetts Elder Abuse Hotline at 800-922-2275. Teresa Kourtz of OCES advises:  “Help us shine a light on elder abuse.  If you see something, say something.”

To see more photos of the event, visit our Facebook page OCESMA or follow this link: https://www.facebook.com/pg/OCESMA/photos/?tab=album&album_id=514773708937044