20 OCES staff traveled to the State House to have their voices heard at the LEAP Day event. About 300 seniors and advocates of elder services rallied Monday, February 29th for funding and policy changes to better serve elders, a fast-growing segment of the Massachusetts population. 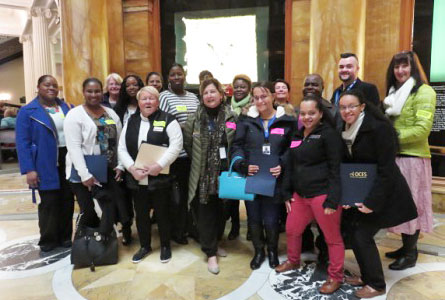 Event organizers said the elderly population in Massachusetts will soar by 360,000 people between 2015 and 2035. About 10,000 people turn 65 every day in the United States and nearly 40 percent of those hitting that milestone will need long-term services for more than two years, with 16 percent needing more than $100,000 in services.

The Massachusetts Councils on Aging (MCOA), citing estimates from the University of Massachusetts Donahue Institute, says the number of adults 60 and over in Massachusetts will soon eclipse the under 20 age group for the first time in recorded history. On Leap Day, the seniors and advocates challenged Beacon Hill to make a “budget leap” to address the needs of the increasing older Massachusetts population.

As the first Baby Boomers turn 70 this year, we are asking lawmakers and the Baker administration to make more people eligible for home care assistance; to raise the wages paid to home health aides; and not to force elders into certain health care plans. Home care advocates are also urging state officials to take advantage of funding streams under the federal Affordable Care Act.