The banners are designed to raise awareness of the impact that elder abuse has on our community, and to remind citizens that OCES provides services to investigate and intervene when abuse or neglect is suspected. OCES will be hosting our annual March Against Elder Abuse in Brockton on June 15 and in Plymouth on June 22.

Lynn Smith, Development Manager, worked with the city to create a pilot program for the display of this type of public service banners. At the event, she introduced Diana DiGiorgi, COO, and Theresa Kourtz, Director of the Protective Services Program.  Terri spoke of the close to 25,000 cases reported to the Executive Office of Elder Affairs last year, and of the outreach and efforts of the OCES Protective Services Team in our greater Plymouth County service area.

Each of the banners was designed with a variety of photographs that represent the diversity of our community, and each has a strong message: Stop Elder Abuse, Prevent Elder Abuse, Report Elder Abuse.

This is the first time that public service banners have been placed on the newly installed wrought iron light poles. At the ceremonial event, Mayor Carpenter and DA Cruise spoke briefly about the efforts that the city and the DA’s office make to address this issue.

The Commissioner of Public Works, Larry Rowley, provided a bucket truck and operator to assist in the raising of the first banner. Mayor Carpenter became an honorary DPW worker for the day and was hoisted into the air to attach the first banner to a pole.

The event concluded with the OCES team reminding the public to contact us with any questions or concerns around this topic. 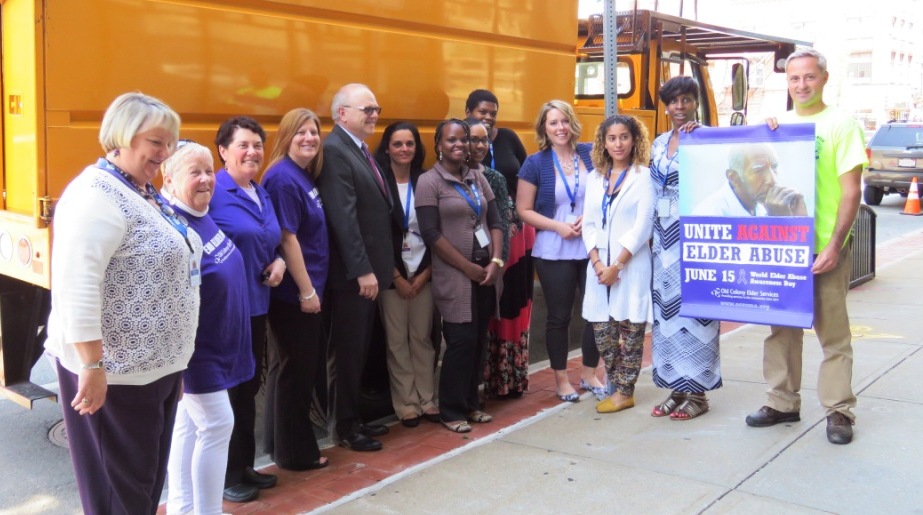